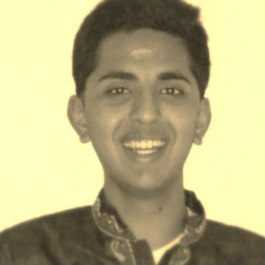 Varun has also learned western music on the piano for about 6 years.

During his spare time, Varun loves to listen to music, play video games, and do puzzles.
[/mks_toggle]

[mks_toggle title=”Violin: Sri. Aravind Seshadri” state=”close”]
Aravind is the grandson and disciple of Vidushi Smt. A. Rajamma Keshavamurthy, a Rajyotsava Awardee and a renowned vocalist of in the state of Karnataka. Aravind is the son & disciple of renowned violinist Vidwan Sri B. K.Sheshadri. He has had advanced training under Sangeetha Vidyasagara Violin Vidwan Late Sri R. R. Keshavamurthy. He is presently pursuing advanced training under his brother Anand Sheshadri who is a renowned vocalist and mridangam artist.

Aravind has been performing from past 10 years at various Sabhas and organizations – like DD Chandana, Kamat group, etc. He has accompanied many budding and several renowned visiting artists in Bangalore, the Bay Area, and San Diego such as Vidwan Sri Vidyabhushana and Vidhushi Dr. Suma Sudhindra.
[/mks_toggle]

[mks_toggle title=”Mridangam: Ganesh Murali” state=”close”]
Ganesh Murali is from Mumbai, India. He has recently completed 10th Standard. Ganesh has been learning the Mridangam for the last seven years from his guru, Shri Shankar Lakshman. Ganesh has won several state-level Mridamgam competitions in India.

Some of Ganesh’s hobbies include drawing and swimming; he has won several competitions in drawing as well.
[/mks_toggle] 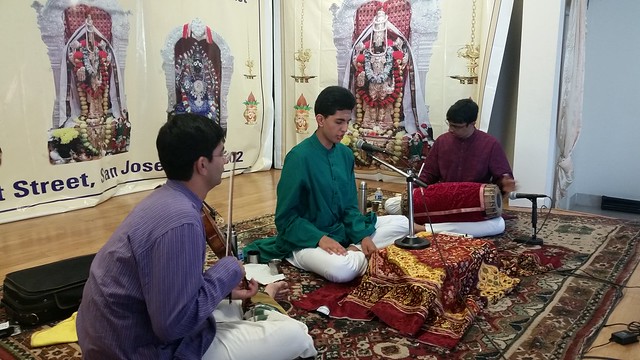 [mks_tab_item title=”Map and Directions”]
How to get there:
Click here for directions to Balaji Temple.